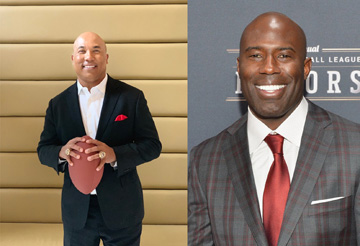 – In the wake of thrilling playoff games, football has never been hotter, and TUMS is in on the competitive action with its popular TUMSworthy Big Game Trivia contest.The contest takes place on Twitter and offers fans a chance to win up to $88,000 in prizes.The contest kicked off in advance of game day with a special head-to-head trivia matchup between football legends Terrell Davis and Hines Ward. Comedian and television personality Scott Rogowsky hosted the livestreamed event via @TUMSOfficial. Rogowsky will keep the questions coming as he hosts TUMSworthy Big Game Trivia on Big Game Sunday."I’ve always enjoyed the thrill of competition, and the trivia battle with Terrell Davis took me back to the gridiron," says Hines?Ward."I’m happy to get the win, but even more honored to support TUMS® and get fans excited for TUMSworthy Big Game Trivia on Sunday."Davis relished the trivia battle, too."I had so much fun competing against Hines, but I can’t wait for fans to have their chance to get in on the action. TUMSworthy Big Game Trivia is a great way for fans to enjoy their Big Game experience this year," he adds.Fans can join any time before Big Game Sunday by registering on Twitter @TUMSOfficial.Shortly before kickoff and during the Big Game, TUMS® will live tweet links from the @TUMSOfficial Twitter handle. Each tweet contains a unique link that sends players to a microsite, where they answer multiple-choice trivia questions and get instant feedback on their answers. Each correct answer equals one entry into the sweepstakes, and one grand-prize winner will be drawn randomly to receive a $56,000 cash prize. Participants also will have a chance to win part of an additional $32,000 in prizes throughout the game.Players can share their standing on the live leaderboard via Twitter using #TUMSworthyTrivia, creating a fun and competitive community for players across the country or in the same room. In tweeting, participants also get one extra entry into the sweepstakes."TUMS® helps fans enjoy the Big Game to the fullest, not only by providing fast-acting and powerful relief of heartburn, but also by delivering engaging ways to elevate their game day experience," explains Amy Sharon, Director at TUMS.®Visit TUMS.com for more information on TUMS® antacid products.

BookBites: Four Titles to Keep You Engrossed During the Holidays

(NewsUSA)"Facade"by Melody SalehWhat would you do for your best friend? Or, rather, what wouldn’t you do? The lives of Amber and her best friends spiral out of control. Amber sets out to seduce a sexy attorney, but are they meant to be together? Debra tries to rebuild her life, but does she say yes to […]

Financial Planners Reflect on Barriers, Opportunities in the Profession

(NewsUSA) – Creating a financial planner workforce that reflects the changing demographics of wealth in the United States is important for ensuring the long-term success of the profession and the ability of Americans to access the advice they need.In recent years, significant progress has been made in attracting more women, people of color, and young […]