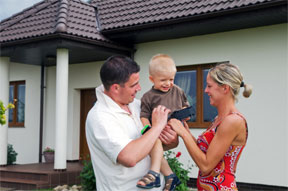 – Sponsored by GAF – Finally ready to take the plunge? Join the club.After having waited on the sidelines for what seemed like forever, first-time homebuyers last year made 38 percent of all U.S. single-family home purchases – the biggest share since 2000 – and the 2.07 million new or existing houses they bought ended up being 7 percent more than in 2016, Bloomberg.com reported."Pent-up demand" is how the news site described it, citing Millennials as one of the driving forces.But the market for house-hunting newbies like yourself has changed considerably from that most recent high mark of nearly two decades ago. And you know what they say: "Forewarned is forearmed." Read on.* Inventory is tight.So tight, in fact – especially for lower-priced starter-homes – that, as the Wall Street Journal wrote, even "buyers in historically calm markets such as Boise, Idaho, and Minneapolis are facing bidding wars, prompting them to dig deep into their coffers to win deals."Not into bidding wars? Well, there’s always Little Rock, Arkansas.Unlike Denver, Seattle and San Francisco – which LendingTree named the "most challenging" cities in the nation for first-time buyers – Little Rock was rated a veritable paradise for house hunters.* There’s still a lot of all-cash buyers out there, so don’t be afraid to get creative.Though the number of all-cash transactions peaked at 40 percent in 2011 and 2012 – with savvy investors still taking advantage of the subprime mortgage crisis by buying up homes many then rented out – last year’s 28.8 percent figure remains above normal. (One reason for the tight inventory: "Investors (are) making too much money as landlords to sell," according to MarketWatch.com.)Granted, you’re at a disadvantage if someone else waves $500,000 in cash in front of a seller even if you arrive pre-approved for a mortgage. However, HDTV.com tells the story of a couple who got a "great deal" on their Denver home – yes, Denver – by adding a contingency to their $300,000 bid that they’d pay $1,000 over any other competing offer up to a maximum of $329,000."Although unconventional," the site admitted, "a creative strategy like this can be very effective in today’s market."* Don’t automatically reject a fixer-upper because you’re not handy enough to fix things like the roof.Everyone knows you can save a bundle by buying a house that needs work, but some things – including electrical system overhauls and extensive roof repairs – are safer left to the pros. So the question becomes this: How far ahead would you come out, financially, after deducting those costs from the house’s likely post-renovation market value?"An attractive roof is the ultimate curb enhancer, so it’s important to figure that into your calculations," said Patsy O’Neill, a sales associate with Sotheby’s in Montclair, New Jersey.You can play around with different looks (i.e., Victorian vs. ranch) by using the free Virtual Home Remodeler launched by GAF (gaf.com), North America’s largest roofing manufacturer. And the website’s GAF Master Elite Contractor database can help you find the most reputable and adequately insured professionals in your area.* You may be being watched.Literally.With owners leerier these days of strangers walking through their properties, they’re increasingly employing devices capable of tracking prospective buyers’ conversations and actions.Yes, it can be creepy. The bigger danger, though, as MarketWatch.com noted, is that – if you don’t watch what you’re saying – there’s "a real risk" of tipping your hand enough that you wind up overpaying.

(NewsUSA) -What if Grandma’s cookbook could talk? What if lost recipes could be recovered and safeguarded for posterity? What if delectable treats from the past and present were readily accessible? The new DishtoryApp mixes it all together and makes it possible!Nothing tells a family’s history like the food they share and the dishes they prepare […]

(NewsUSA) – Stress levels are especially high these days, and many people are exploring alternative options to manage stress and improve their overall health.Cannabidiol, also known as CBD, is a natural compound derived from the hemp plant. Although CBD is one of the active ingredients in marijuana, it does not have the psychotropic effects of […]

(John Hansen) – Solar energy isn’t new, but like any worthwhile technology, it has been upgraded. When you think of solar panels, do you think of unsightly blocks marring the lines of your roof? Today’s solar energy panels are a clean and sleek source of renewable energy that increasing numbers of homeowners embrace as a […]