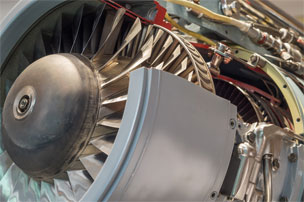 – The aerospace industry is getting a boost in manufacturing its parts, making them safer and stronger, through a revolutionary new approach called 3D printing or "additive" manufacturing – a process which was invented at MIT in the late 1980s.In the traditional method, companies start with a hunk of metal (or other material). Using milling machines and other tools, they cut or drill away material in order to create the desired part.In contrast, 3D printing builds parts layer by layer, adding material in just the right places to create the precise shapes needed.For aerospace companies, this 3D printing or "additive" manufacturing offers the promise of making parts that are better and stronger, enabling them to build airplanes and rockets that are safer, more reliable, and better performing. GE uses 3D printing to build jet engine fuel nozzles, for instance, instead of welding together 20 small pieces. Technology Review recently named additive manufacturing one of its 10 "Breakthrough Technologies."But this new industrial revolution is being held back by a thorny problem. Tiny variations in parameters like temperature or raw material composition can subtly alter how each layer of material is laid down. As a result, it is extraordinarily difficult to build identical top-quality parts every single time.The industry has recognized this problem, and is working hard to solve it. The most promising approach is meticulously monitoring all the relevant parameters as a part is being built, then processing the information to determine if the part meets all standards. That will ensure repeatability, consistency, and reliability.Several companies are working on this idea, but one leader is Santa Fe, NM-based Sigma Labs, Inc (NASDAQ:SGLB). Sigma has developed sophisticated software that monitors the 3D process as a part is being built, and determines whether the product meets quality standards. Its Process Quality Assurance™ software is now being used in pilot projects at major aerospace manufacturers.
Source: NewsUSA Tech

(NewsUSA) – A revolution is brewing in manufacturing, especially in high-tech industries such as aerospace.That revolution is being made possible by a whole new approach to making things, called 3D printing or "additive" manufacturing, which was invented at MIT in the late 1980s.In the traditional method, companies start with a hunk of metal (or other […]